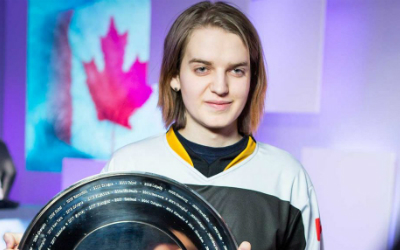 The 2018 Olympics have only just gotten underway, but Canada already has a champion in Pyeongchang.

IEM Pyeongchang was a pre-Olympic esports tournament that provided a glimpse of what Olympic esports could look like in the future. Granted, South Korea has a particularly close relationship with esports, having embraced the new form of competition from its earliest days. This could, then, just be a one-off Olympic tie-in, but that shouldn’t take away from its potential significance for the esports space.

Hostyn’s accomplishments shouldn’t be overlooked, either.

Not only did she become the first woman to win a premier event (the most prestigious tournaments in the community with the highest payouts), she became just the second Canadian to do so in the game’s near-eight year tournament lifespan — Chris “HuK” Loranger won three premier events during his tournament career.

Hostyn is also one of just 26 “foreigners” to win a Starcraft II premier — “foreigner” meaning non-Korean since the game enjoys outrageous popularity in South Korea and many of it’s strongest players have been Korean.

For winning, the 24-year-old pocketed a cool US$50,000 and she’s now off to compete in South Korea’s 2018 Global Starcraft II League (GSL) Season 1 round of 16 as the lone foreigner remaining in a field that featured just three — fellow Canuck Jake “NoRegreT” Umpleby and Sweden’s Rickard “SortOf” Bergman were the others.

The prize money adds to Hostyn’s record mark as the highest-earning female esports player in history.

Hostyn began playing Starcraft II at a tournament level in 2011.

Some news and notes around esports heading into the weekend:

Another first — the OWL stage final

Sticking with Blizzard, the Overwatch League’s first-ever stage final goes Saturday with US$125,000 worth of bonuses on the line.

As much as the OWL is trying to emulate traditional sports leagues, its stage format sets it firmly apart. The season is broken into four five-week stages with the top three teams from each stage moving on to a playoff round at the end — the stage finals — to compete for a little extra cash. The winning team will receive $100,000, while the runner-up walks away with $25,000.

Barring a real disaster, the London Spitfire and New York Excelsior look to have the top two spots in Stage 1 locked down. The battle for the third is a real dog fight, however, with the Los Angeles Valiant, Seoul Dynasty, Houston Outlaws, Boston Uprising and Philadelphia Fusion all in the mix.

You can watch the first Overwatch League stage final Saturday at 7:00 p.m. ET.

previous New Luxor arena could prove Las Vegas is the perfect place for esports
next Google WILL rival PlayStation, Xbox One and Nintendo Switch with NEW games console