Electronic sports competitions are coming to high schools, thanks to start-up PlayVS 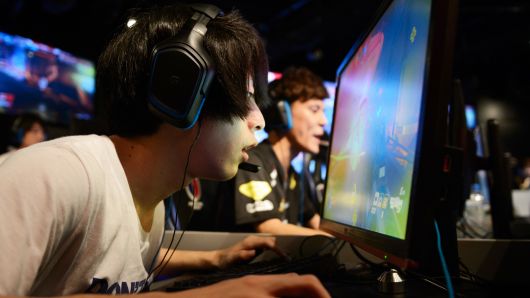 High school isn’t usually considered a place where electronic gaming is acceptable — but if one start-up has its way, the booming industry could become as big as college sports.

PlayVS, an esports platform for high school competitions, recently secured $15 million in funding from New Enterprise Associates, the San Francisco 49ers, rap star and venture capitalist Nas, and Twitch co-founder Kevin Lin. The round values the company at $50 million, according to ESPN.

Flush with new capital, PlayVS has partnered with the National Federation of State High School Associations (NFHS) — the high school equivalent of the NCAA — which will allow it to facilitate esports competitions across 50 states.The NFHS publishes playing rules for sports in 50 member state high school athletic/activity associations as well as administers fine art programs in speech, theater, debate and music.

With PlayVS, students will be able to compete in esports in school, just as they would any other sport like baseball or softball. The platform will provide software and help schools define the rules for students to compete; in turn, students will form teams, and even faculty can get involved. Eventually, college recruiters can reach out to schools to scout for talent.

There will be a preseason in October for students to find teams and compete in low-stake matches. October through December will mark the regular season, when states are split into four conferences and students will compete weekly.

“We’ve always had this concept,” PlayVS CEO Delane Parnell told CNBC recently. “If esports are going to grow, it’s going to mirror traditional sports in some ways. There are going to be a lot of similarities.”

The playoff hunt will begin in January, when top teams from each conference square off against each other, in order to win a spot at a state championship. Those title games are expected to be played in person. With the dozens of teams and games possible, each can form its own community, and support a wide bandwidth of players on any given team.

The company will kick off games starting this fall. While it hasn’t announced the games yet, there will be four genres spanning five to eight games that players can compete in. These games will span sports titles, action, mobile and online, and much like a multisport athlete in traditional sports, gamers can compete in more than one type of game.

Parnell mentioned that there are multitudes of college scholarships for high school players who compete in esports — and they often go unfilled, because there are no organized competitions. Just as high school athletes join NCAA sports programs, Parnell is banking on the popularity of esports to create a similar dynamic for gamers.

Parnell said that “there [are] 16 million kids in the country and only 8 million actually playing high school sports. Esports operates as a network versus traditional sports, [so] we can have as many esports team set records in the school as there is interest. If there is a 55-person team that wants to set up at a school, we can support that because we produce the competition through software.”

previous How Much Can The eSports Market Grow In 2018?
next Hi-Rez kickstarts Realm Royale esports