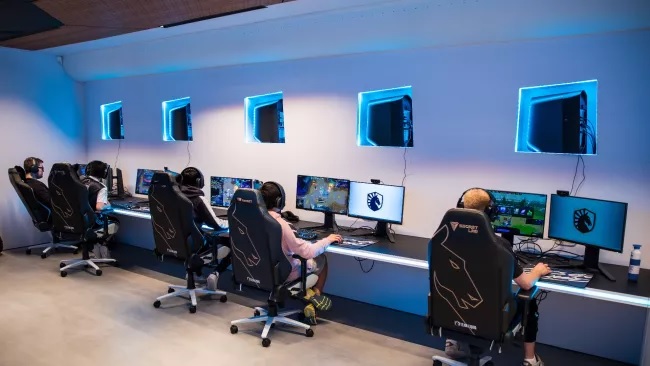 n the underbelly of what, inside, looks like a dormant UFO, deep in the heart of the rising “esports capital of europe”, Team Liquid now trains it’s almost-inhuman talent to become the “most winningest” specimens esports has ever seen.

A few months off celebrating 10 years partnered with Dell Alienware, Team Liquid has erected a temple to pro-gaming. The facility is a shining beacon of esports, which now operates at the rather blocky Het Platform in Utrecht, the fourth-largest city in the Netherlands. We’ve got the scoop on the player’s daily routines at this elite training facility, and how the talent utilises their new HQ to stay on top of their game.

The building itself sits atop a pretty sci-fi looking transport hub, and is the final addition to Utrect’s city center renovation. As such, the Utrecht municipality has been “enthusiastically involved” in the project, according to Brittany Lattanzio, Team Liquid’s Senior Talent Manager.

The whole build is just under 280,000 square foot of eco-conscious architecture, built using recycled and bio-based materials, complete with a fancy living wall. And Team Liquid itself takes up a solid 11,400 square feet of that space.

Having put down over $452,000 worth of PCs and monitors alone, this is really the first time Alienware has done anything of this scale, explains Lattanzio. So, it’s been as much of a mental investment for the company as it has been a financial one. The development has also been an opportunity for Alienware to explore “what the future of esports can really look like for them,” says Lattanzio. Honestly, it’s looking bright if these pictures are anything to go on.

She also notes that a lot of work went in on Team Liquid’s end to ensure Alienware’s “vision came to life in a way that they were happy with.” So far, the mothership seems pleased.

Lattanzio jokes that the interior is “like being in a space-ship”, and although we weren’t able to visit due to the pandemic, I’m inclined to agree looking at the pictures we’ve been sent. The fixtures and furniture are out of this world, and there really is a great deal of *ahem* space.

In any case, it’s a hell of an upgrade from the team’s humble beginnings in 2000.

Now, a far cry from its roots, the various Team Liquid teams have access to the lowest latency connection in esports. Not only are they sitting on ridiculous internet speeds, they also have two swanky scrim rooms, themed around Alienware’s signature lunar light and dark side of the moon aesthetic.

“Everything in the facility was selected to mirror tournament on-stage specs. This includes our desks and chairs, the equipment and hardware we play on and the respective configurations for each,” another spokesperson for Team Liquid tells us.

The whole facility has been kitted out with top-end tech, including 75 Alienware Aurora R11s, each running Intel Core i9 10900KF CPUs and Nvidia RTX 2080 Ti graphics cards. That’s a whole lot of processing and pixel-pushing power. There are also 140 AW2521HFL monitors across the facility, including 15 ultra-wide versions for the design teams. They’re also showcasing the newly announced, 24.5-inch, 360Hz AW2521H esports monitor at the facility, as well.

Just off each scrim room, there are ‘movie theatre’ style review rooms, each with a 4K Projector and a Dell Canvas for scribbling strategies. Players even have Big Brother style ‘call pods’ for private video chats, and streaming. There’s a gorgeous dining space with professional chefs at the ready. There’s no set menu; it’s constantly adapting, with exciting themed meals from across the globe.

There are open offices, conference rooms, and ‘chill zones’—foosball table, and all. Team Liquid is also renting out the entire first floor of apartments at the Het Platform, situated above the training facility. This means players have their own self-contained ‘luxury flats’, just upstairs. These are relatively modest en-suite bed and desk dorm rooms, designed to “facilitate rest and relaxation.”

Each comes equipped with two AW2521HF 240Hz monitors, and a shiny new Alienware Aurora, with Intel Core i7 processor and RTX 2060 Super graphics card, for “light streaming and leisure use.”

Of course, as an esports organisation, the biggest priority is to have teams that win, but this would be truly impossible without happy, healthy, and comfortable players. I’ve been asking how they look after the players physical and mental wellbeing at the facility, so they can stay ahead of the competition.

First off, many fail to consider the immense mental pressures inherent in this line of work. These teams practice 6-8 hours a day, longer than most mere mortals could stand physical exertion; sometimes they’re on all day at tournaments—so, cognitively, it’s a big strain.

Having been the first team to bootcamp at the facility, the Dota Team were really the “guinea pigs” for the facility. After their morning workouts and warm ups, they would practice from 1 or 2pm until 8 or 9pm. That’s a full day’s work, plus the pressures of potential esports fame on top of it all.

Not everyone at Team Liquid can be like Speed, who says he’s “dead in the middle” of the introvert-extrovert spectrum. For a lot of us nerds, it’s difficult to get into that sociable place, and we might need longer to recharge. To ease the psychological burdens, the lounge offers a space to chill after a long day’s clickin’.

The talent also has access to two sports psychologists, or ‘mental coaches’, at the facility. Players can schedule sessions with them for support, advice on how to get in the zone, or (a really common one) how to handle burnout. They also help with things like building general resilience and communication skills.

“The benefit of this place,” Rocket League pro, Speed, explains, “is the ability to separate my work from home… Going to sleep where you work… it means my brain’s always in it.”

At home, he would be working and resting in the same room, essentially sleeping in his office. So, for Speed, living on site makes all the difference, as he feels he’s more able to switch off by physically distancing himself when he leaves the training rooms.Image 1 of 6

They cater for each individual player’s dietary requirement and, according to Speed, “the food they cook is really, really, really good.” Sounds like a win for the kitchen duo. The pair were also asked for their design input for the kitchen, too, “so they’re happy,” says Lattanzio.

When it comes to physical fitness, it’s important the athletes keep up their core strength, to improve posture, and arm strength for those game-winning, competitive clicks, as well as the all important carpal tunnel prevention. There’s a nearby gym that players will soon be given passes for (once the world opens again). For the moment they have individual lockdown setups they are encouraged to make use of. Nothing too fancy, so I’ve been told, but they get the job done. Lattanzio also notes that they “don’t have a physical therapist, yet,” so maybe they’ll be making this kind of service available in future.

Obviously, it’s imperative the hardware on site is always working, that way the athletes can just plug in, and play on. Lattanzio explains that Dell Alienware are “very cooperative” when it comes to providing hardware. Players are given a lot of options when it comes to peripherals, and are even involved in the equipment design process through critical evaluation.

The athletes provide invaluable feedback as to what features work (or don’t), so it’s a win-win for both parties. Alienware gets access to testers who will push the gear to its absolute limits, and players have serious input so they know they’re getting quality, attentively designed, ergonomic equipment.

The players even have input as to lighting levels, so they can request to be put in the dark if the mood takes them—no one wants to be bombarded with fluorescent lighting when they’re trying to game, right? They also presumably have 24 hour tech support, so that takes away a lot of the hardware stress.

Besides, they have all these fancy sci-fi LED strips to increase their FPS, now, so no worries in that department.

Over the years, the world of esports has been steadily evolving, with athletes finally getting the treatment they need to excel. Now, getting the recognition it deserves as a professional sport, teams are no longer exiled to dark and dingy setups in their parents’ basements.

Team Liquid have set the bar pretty high with this Alienware-imagined training facility, further bolstering the vision of being a holistic esports organization. It can now stand proud in the knowledge that the various teams moving through HQ are being properly taken care of.

At least while they await the return of the mothership. Let’s hope they leave the best esport specimens for us, here on earth.