Inside Tencent’s Gambit to Dominate a $13 Billion Esports Arena 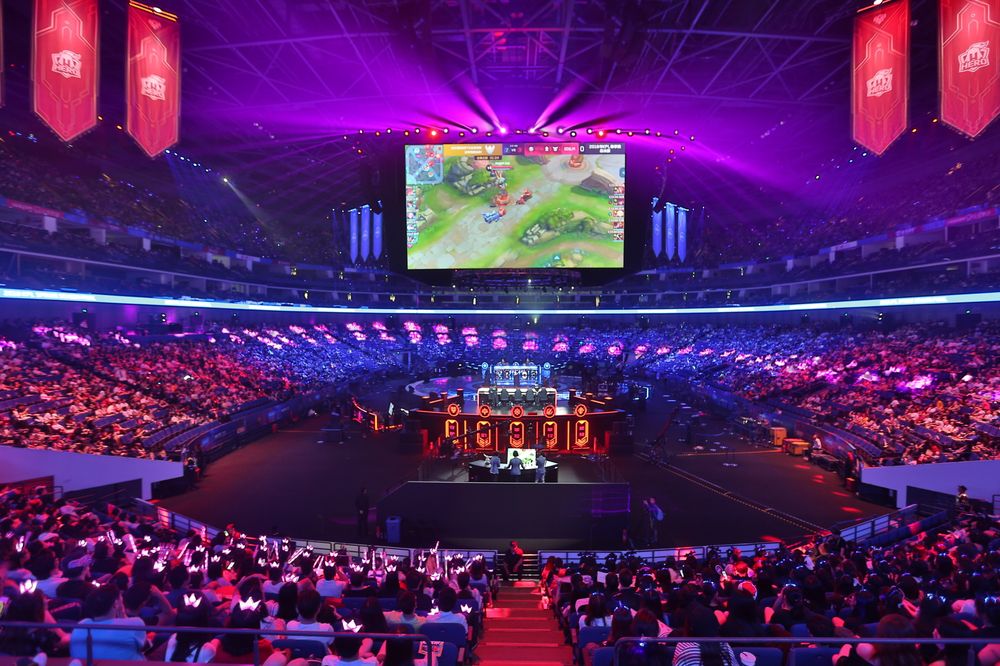 The screams of 18,000 people packed into a Shanghai stadium swell to a crescendo. Slight of figure and mostly bespectacled, 10 young men take their seats in LED-lined boxes straight out of Tron, don headsets, lock thumbs onto giant smartphones — and the battle begins. At stake, a $1.8 million purse — and social media goliath Tencent’s role in a $13 billionesports arena.

Esports is taking off globally but nowhere more so than in China: a nation of over 400 million gamers fueling viewership comparable to U.S. pro sports. At the heart of the world’s biggest gaming market is Tencent Holdings Ltd., which is betting a billion yuan ($150 million) a year that slugfests like Honour of Kings will ensure its primacy in the burgeoning market.

Along with Activision Blizzard Inc., Tencent’s become one of the most aggressive promoters of pro-gaming. It’s hard to overstate the mania that’s gripped China in particular: at least 10,000 teams exist across the country despite just 12 spots in this year’s marquee King Pro League tournament. Last year’s matchups garnered as many as 240 million daily views — double the U.S. audience of the Super Bowl — on TVs, phones and computers with top players commanding multi-million dollar transfer fees.

And as the International Olympic Committee considers including esports in its ever-expanding roster, pro-gaming is an endeavor in which China is a prime contender.

“Esports is entering a golden age in China and globally,” said Cheng Wu, the Tencent vice president overseeing its efforts after stints at Google and P&G. “It’s one of those few areas where China has a real chance of coming out on top to compete with developed countries.”

Tencent isn’t the only one that’s cottoned on. From Walt Disney Co. to Amazon.com Inc. and Electronic Arts Inc., some of the world’s largest media giants are vying for a slice of the pie, inking deals to air esports on ESPN or creating leagues, including Tencent’s own Riot Games Inc. But the Chinese firm’s in the unique position of owning and backing signature titles such as League of Legends and Fortnite, plus a distribution channel anchored by its billion-plus WeChat users. Through rare interviews with Tencent executives, the social media titan outlined its strategy for dominating competitive gaming.

To that end, it’s teaming up with Under Armour on game apparel and the National Basketball Association for a show that features top gamers. It’s adapting Honour of Kings into a fantasy novel and producing a TV series and film centered on players. Taking a page from Blizzard’s Overwatch League, it’s also decided on a more typical professional set-up where select clubs — and thus their investors — are guaranteed spots in tournaments.

“The new system will eliminate concerns for investors and club owners,” said Zhang Yijia, the King Pro League president and a general manager of mobile esports for Tencent.

At the center of Tencent’s ambitions is a franchise just two years old: Honour of Kings, the blockbuster that took China by storm before migrating abroad as Arena of Valor (to a slower start). It’s still the first mobile game developed in-house that has a chance of making it big globally: its near-identical international version will be one of six titles for the upcoming Asian Games, a big endorsement for the genre.

The title “combines elements of Chinese historical characters, heroes and culture, and it helps with the export of our historical heritage,” Cheng added.

To boost its international visibility, the company’s inviting teams from South Korea, Malaysia and North America to join another showdown later this year, said Zhang. “The Asian Games are a great start. It will help us expand into the global arena.”

Back in Shanghai, the spectacle rages on. Teams of  five slash their way through an arena, firing off magical attacks, circling choke-points and maneuvering into strike position. The audience stares up at a Jumbotron as the camera swivels wildly between one frenetic melee to the next. One of the many young women present bursts into tears — a testament to the title’s popularity among females. Ultimately, the winners share 12 million yuan ($1.8 million) in cash prizes but at least 200 million yuan of revenue will flow to Tencent from distribution rights and advertising alone.

Like professional sports, esports involves more than just players, with agents, managers, talent scouts, marketing experts and even nutritionists emerging to support budding celebrities. Running a top-notch team in China requires as much as $3 million annually, by IDC’s estimates.

The most important cog in that machine are the likes of 23-year-old Zhang Yuchen, who’ll lead his country in August during the Asian Games in Jakarta. For every round that Zhang plays, there might be 10 or more support personnel: coaches, data analysts, physical trainers and even psychologists

Raised in China’s northeastern rust belt, he dropped out of school after 10th grade and hopped between jobs before cashing in on his penchant for play. What started out as light-hearted fun two years ago has become a noon till 5 a.m. daily grind centered around spartan dorms where gamers eat, train and sleep. It never ends: ultimate proficiency is a moving target because Tencent constantly tweaks the game’s design and balance, anything from maps to characters’ skill metrics.

The payoff: This year, Zhang pocketed a 10 million yuan check for switching clubs.

“Maybe in the beginning we were only playing, but then we started to realize in order to get results, you need to invest a lot and the training hours start getting longer,” said Zhang, speaking into the floor beneath a mop of unkempt hair. “It’s counter-intuitive to the notion of playing games for relaxation or joy, that professional gamers need to spend a huge amount of time thinking and studying.”

In tournaments, Zhang morphs into a clear-eyed killing machine. That’s helped him blow his way through a web of tournaments that goes from university and city to regional and finally national level. There’re finals for the spring and fall seasons and a grand championship that is equivalent to the FIFA World Cup.

“It’s the same as watching soccer,” said Celia Hodent, the author of “The Gamer’s Brain” who’s worked on user-experience for Fortnite. “We root for our teams, because humans need to feel that they belong to a group and we relate to the other members of this group. We also invest emotions through the narrative out of the game, just like when we watch a suspenseful movie.”

Investors have noticed, driving gaming stocks to record highs. Huya Inc., a Chinese Twitch-like streaming service backed by Tencent, has tripled since its May listing.

Tencent however has to deal with fairly unique barriers on its own home turf.

As China’s dominant gaming company, it’s become a lightning rod for criticism of game addiction and spurred a public outcry and demands for accountability. Last year, Tencent was forced to limit game-play for minors. Alibaba Group Holding Ltd., Tencent’s rival in most realms, is trying to get things going by promoting what it calls non-violent esports pursuits focused on soccer and racing.

With esports however, the prize money and celebrity-like status of top gamers may help win some parents over, like the bevy of proud mothers and fathers who were accorded pride of place in the arena during this year’s Honour of Kings tournament.

“Much of what makes gaming beguiling and engaging is that its algorithms adjust based on who you are,” said Nir Eyal, author of “Hooked: How to Build Habit-Forming Products.” “Players’re always just a grade below achieving perceived optimal performance — hence developing a constant yearning for improvement and reward.”

The bigger question may be longevity, in an industry infamous for titles that blaze to record heights before fading into obscurity. Honour of Kings has so far shown sequential revenue growth each quarter since its debut, according to Alex Malafeev, co-founder of SensorTower. IDC analyst Neo Zheng thinks it’s got at least two to three years to go.

Then there’s the question of how long the gamers themselves can endure their punishing regimen. Zhang’s already thinking of life after gaming, noting how 25-year-old compatriot Zuo Bin is now a commentator with more than 670,000 fans on China’s equivalent of Twitter.

“I’ll stay in the industry, maybe become a coach,” he said. “But being a professional gamer is what everyone in this industry really wants, so I’ll try to stick to it for as long as I can.”

previous Could the Google Yeti and cloud gaming change everything?
next Gaming Marketplace for Unique In-Game Items Partners With Esports Team Tempo Storm