How Major League Baseball Is Approaching Future Entry Into Esports 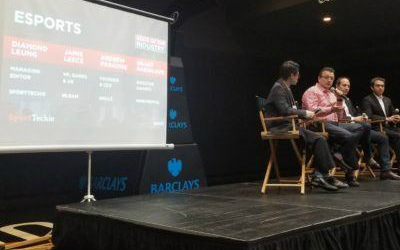 NEW YORK — Major League Baseball and MLB Advanced Media are keeping a close eye on the esports landscape as the league considers how it might enter the space in the future.

“I think it’s all about fan engagement, and it’s about finding the right place to go in,” Jamie Leece, MLBAM’s Vice President of Games and VR, said Tuesday at SportTechie’s State Of The Industry event. “So we certainly are looking at it.”

“There’s been owners, there’s been players (having already participated), and obviously there’s a lot of competition that goes on right now with our various licensed games that we have. So it’s about finding the right entry point. I think the NBA and 2K have a good opportunity to get together and do something like Madden and FIFA have done.”

As a veteran of the video game industry for nearly 28 years, Leece is also following how the Overwatch League that began play last month and PlayerUnknown’s Battlegrounds (PUBG) develop as esports. How sports video game titles can work as esports will be something for MLB to closely watch.

The NBA 2K League, with 17 inaugural teams that represent NBA clubs drafting salaried players in March and scheduled to begin playing in May for $1 million in prize money, can provide a gauge of what works and what doesn’t for MLB.

Other pro sports leagues in the U.S. are diving into esports as well. The NFL held a league-wide Madden NFL Club Championship competition this past season for casual gamers representing NFL teams. The gamers didn’t quite become household names, but they competed at the site of the Super Bowl for a $403,000 prize pool, and the final was televised on ESPN2 and ESPN Deportes.

NBA 2K18 and Madden NFL 18 were the top top-selling sports video games in the U.S. last year according to The NPD Group. Major League Soccer is launching eMLSas a FIFA 18 league. The NHL this season is set to announce a series of competitions involving EA Sports’ NHL game, according to league commissioner Gary Bettman.

Where does that leave MLB?

“I think a lot of those sports are doing it for specific reasons, and we have our reasons too,” Leece said. “I think it’s just a matter of finding the right place to enter and making sure that it’s something that the fans want and it’s done the way that the fans can appreciate that both as a video game and ultimately as an esport.

“I think for us, it is about doing it right, and it’s about making sure that we’re very mindful of the marketplace. There are very few esports activations that are profitable as an activation. The products behind them can profit. The organizations that are around those esports can profit. But the actual contests themselves are still trying to find a way to not be more than the marketing budget. So that’s something that I think as a league or an IP holder or as a licensing partner, that’s the thing you have to solve to make sure that you’re not just one, doing it wrong, or two, throwing good money after bad.”

Get The Latest Sports Tech News In Your Inbox!

MLB: The Show, R.B.I. Baseball (developed by MLBAM) and MLB Tap Sports Baseball (on mobile) are products to be considered for competitive gaming. But as Leece noted, even with the commercial success of sports titles such as NBA 2K, “Ultimately I think the product for any of the sports out there that would be the big esport probably hasn’t been made yet.”

For Leece, he has seen how for mature esports that have engaged communities, there is a team-based approach to the game that fans can follow, with drama created through gameplay and broadcast elements.

And while sports titles can benefit from viewers being able to easily understand the gameplay, whether those games will attract the masses to watch virtual gameplay when they can watch the real thing remains to be seen.

“I think the argument right now and we’ll see it soon with the 2K League and the maturation of FIFA and Madden is would people watch a video game version of sport versus watching the real sport?” Leece said.

So while Leece sees esports as an opportunity to take the video game industry to a new level with consumers, MLB will continue to evaluate its own approach.

“I think we all have to be a little bit cautious,” Leece said. “We’ve gone from a state where say three or four years ago there were two big products that were considered esports, and now there are hundreds and hundreds of intellectual properties that are trying to become esports. So there will definitely be a period of time starting soon and if it hasn’t already happened where there will be bit of shaking out of who are going to be the players moving forward.

“We’re in early days in esports in general, and we’re certainly in early days of sports being leveraged as an esport. I think that we’re all going to learn from what the fans are interested in and how they’re going to engage it.”

previous IndieCade East 2018
next Could Esports Become Part Of Olympics By 2024?