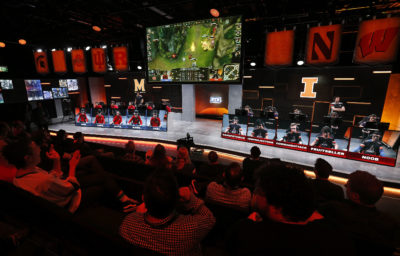 Next week, the eyes of Mountain West fans will turn to Las Vegas as both the women’s and men’s basketball tournaments will begin with a trip to the big dance on the line. All 11 schools will send a team to try to hoist the trophy and prove they are the best in the west.

But basketball will not be the only sport with a title on the line in Vegas. Or should I say eSport title?

For the first time, the Mountain West will host an “eSports Showdown” with teams from Boise State and UNLV going head to head for the crown. Each squad consists of 15 players and they will compete in three of the video game industry’s top competitive titles: “League of Legends”, “Rocket League” and “Overwatch.”

“As a conference, we have never been reluctant to try new and different things, and I appreciate the encouragement and support of our university presidents in bringing this exciting new initiative forward,” MW Commissioner Craig Thompson said in a statement. “Globally, eSports is enjoying a boom in popularity – particularly among young people who are in the same age bracket as the students on our campuses. We are also seeing universities add eSports programming, technology and business to their curriculum offerings.”

The events begin March 8 and 9 when the two schools will hold exhibition matches to show off their skills to fans attending the basketball games. Every fan with a ticket to the MW basketball tournament can attend these matches as they will be held in the Strip View Pavilion of the Thomas & Mack Center.

“While over 41 universities have an eSports team, only one out of the 11 universities participating in the MWC has one, which is Boise State,” Global Gaming Capital Coodinator Nicole Schultz said to The Scarlet and Gray Free Press. “With a push from UNLV President Len Jessup and our Mountain West collaborators, a committee was formed to organize the inaugural Mountain West Conference eSports Showdown.”

Boise State is the first university in the Mountain West to have a varsity sponsored competitive gaming team, meaning they could offer scholarships for students through eSports. They are also building the largest gaming facility in college eSports that has a 100-seat training center along with a spectator arena.

As for UNLV, their team, titled 8-Bit, was founded in 2012 and is recognized as a member of the Riot Games Collegiate Program, the makers of “League of Legends.” The program has had former members go on to compete professionally and UNLV is one of a select few universities that offer academic programs that encompass the eSports world.

In Fort Collins, Colorado State has their own team as well. The CSU eSports Association is home to over 300 active members and is the largest student organization on campus. They have done particularly well in the game “Hearthstone” and were the only Colorado team to qualify for a tournament last year where each one of the members of their “CSU Wranglers” squad took home $1,600 in scholarships.

CSU also competed against Boise State in the Denver DreamHack competition back in October. The two schools competed in several titles at one of the biggest events for eSports in Colorado.

The popularity in Colorado cannot compare to growing environment in the entertainment capital of the world, Las Vegas. The city has already become a hub for the eSports industry and the city is also set to open eSports Arena Las Vegas on March 22 in the Luxor Hotel and Casino. The stadium is a collaboration between the Luxor and Allied Esports.

“Esports Arena Las Vegas will be the iconic destination in eSports and complement the city’s incredible appeal, attracting video gaming competitors and fans from around the world,” CEO of Allied Esports Jud Hannigan said to The Free Press.

The popularity in Las Vegas made a pairing with the basketball tournaments a perfect combination for the Mountain West to showcase not only their on-court talents, but also their growing interest in eSports.

“We are excited to connect the tradition of our successful MW Men’s and Women’s Basketball Championships with something innovative and different like the MW eSports Showdown,” Thompson said.

The main event will take place March 10 beginning at 10 a.m. MT and tickets are on sale for $10. The event is scheduled to end at 2:30 p.m. with the men’s basketball title game following right behind at 4 p.m.

Both the exhibition matches and the championship can be viewed online on the Mountain West’s Twitch channel.

Collegian sports reporter Austin White can be reached at sports@collegian.com or on Twitter @ajwrules44