HAWTHORNE, Calif. — The doors opened, fully unleashing the screams of Brian Johnson, which were barely being contained by the empty airplane hangar. When AC/DC’s “Shoot to Thrill” hit as the sonic chaser to the initial shot of “Back in Black,” you would have been forgiven for expecting Tony Stark, in all of his iron-suited glory, to arrive amid fireworks.

At the Hawthorne Municipal Airport in May, 12 miles south of downtown Los Angeles and tucked just out of sight of the always-busy 405 freeway, JuJu Smith-Schuster, erstwhile Pittsburgh Steelers receiver, was just another eager gamer waiting to get his hands on the latest offering in the “Call of Duty: Black Ops” franchise.

That’s not completely true. The rest of the event attendees didn’t get the Hollywood-style step-and-repeat treatment. Or have throngs of cameras huddling over their shoulders while they tried the game for the first time. Or run digital ops missions alongside Todd Gurley and NBA stars Karl-Anthony Towns and De’Aaron Fox.

Athletic fame aside, they’re all just players plugged into a present reminding you that Ernest Cline’s vision of the future is neither too far-fetched nor far-flung.

“Can you hang on just 10 more minutes? One more game,” Smith-Schuster asks, trying to delay our interview in favor of running one more mission. “Appreciate you.”

This is beyond a pastime for Rodger Saffold. The Los Angeles Rams guard has been gaming since he was 3 years old, starting with “the classics” like Super Mario Bros.

“My sisters had it on Nintendo,” Saffold, now 30, said in a phone interview. “I pretty much went to Super Nintendo and I just kept going with the times. I got an Xbox and started playing Call of Duty and I got hooked.”

Like most Americans born after the Carter administration, Smith-Schuster, 21, grew up in a video game world, but he took the first steps toward an esports career when he announced a merchandising partnership with the popular FaZe Clan gaming team last January. Several weeks later, the two sides took their relationship to the next level and decided to move in together — or, more accurately, Smith-Schuster moved in with FaZe, taking up temporary residence in the team’s Hollywood mansion so he could focus on “Call of Duty.”

“It just took over my life,” Smith-Schuster admits. “This is what I do on a daily basis, so why not be a part of something bigger?” 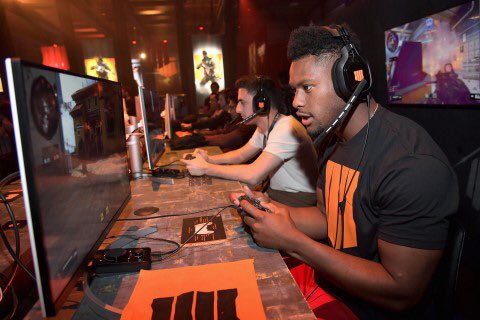 It was through the game and his channel on Twitch — the video streaming service primarily dedicated to broadcasting video gameplay — that Saffold was introduced to a bigger idea, when a suggestion from a viewer inspired him to start his own team. Saffold and his friend, fellow gamer Kahreem “BombeR” Horsley, founded Rise Nation in 2014. The move put Saffold and Horsley on the vanguard of a budding industry.

“I remember them talking about it in the Sports Business Journal, about [me] being one of the only active players to own a team in all of esports,” muses Saffold. “Then you see (former NBA player) Rick Fox and A-Rod (former MLB player Alex Rodriguez) and (former NBA player) Shaquille O’Neal all stepping into the scene, and it was like, ‘Wow, this is about to take off and take off fast.’ ”

(Fox is the owner of the esports team Echo Fox, while Rodriguez and O’Neal invested in the team NRG, along with former MLB player Jimmy Rollins.)

The industry, which has already seen tremendous growth in recent years, is expected to really explode before the end of the decade. According to gaming market research company Newzoo, the global esports audience across all viewing platforms (including Twitch, other streaming outlets and television broadcasts) is expected to top 577 million, with total revenues of $1.5 billion, by 2020 — just shy of the number of gold coins Mario and Luigi have presumably knocked out of bricks since 1983.

“Eventually these leagues will be just as well-known as baseball, football, basketball,” Saffold predicts. “It’s kinda crazy, to be honest.”

The idea that watching a bunch of people play video games could compare to the NFL seems laughable. 2017’s most-watched gaming event was the Intel Extreme Masters Katowice, which was held in Poland and drew 46 million viewers over a variety of streaming services, according to German-based research portal Statista. That same year, 111.3 million people watched the Patriots beat the Falcons in Super BowlLI. Saffold concedes that the Super Bowl has a decided edge but suggests that the demographic for esports viewership will grow as a generation that has embraced competitive gaming comes of age.

“There’s not a lot of 40-year-olds out there watching gaming. But as the generation gets older, it’s just gonna get bigger and bigger,” he says.

It was big enough to get the Twitter slot machine spinning one night in March. That’s when Smith-Schuster teamed up with rappers Drake and Travis Scott and pro gamer Tyler “Ninja” Blevins to stream a game of Fortnite. The Game Heard ‘Round the Internet crushed Twitch records by drawing 630,000 concurrent viewers. (Smith-Schuster says he’s never met any of the others in person but has previously connected with them through social media.)

It’s also big enough to have landed on campus. College kids long ago learned the merits of video games as a procrastination tool, but now esports is becoming a vocation of choice. Varsity collegiate esports began in 2014, when Robert Morris University Illinois sponsored a League of Legends team. Since then, more than 60 other colleges have created esports programs, with a governing body — the National Association of Collegiate Esports — having formed as a support system.

For their part, Saffold and Rise Nation have helped to nurture a new generation of gamers. The team raised around $75,000 to create a scholarship for women and minorities to learn coding and pursue careers in computer science. And gaming is the rainforest that shelters the overall ecosystem.

“You’ve got guys getting scholarships and college gaming. You’ve got guys that leave competitive gaming and just end up working for the developers or the people that create the leagues. So it’s just recycled over and over again until it’s just going to be a huge population.”

A lot of that population already resides in Call of Duty nation. Fortnite has taken the gaming world by storm, but since the initial release of CoD in 2003, the franchise has become one of the best-selling titles of all-time, spawning leagues, tournaments and a final championship with nearly $6 million in total prize money handed out. Saffold says the game’s popularity with most people is about more than a potential professional payday.

“When you’re really good at the game and somebody thinks that they can beat you, it’s really nice to know that they can’t touch you, and you just continue to talk mess,” he says. “It’s just bragging rights.”

And who has bragging rights between Saffold and Smith-Schuster?

“I destroy that kid,” Saffold boasts.