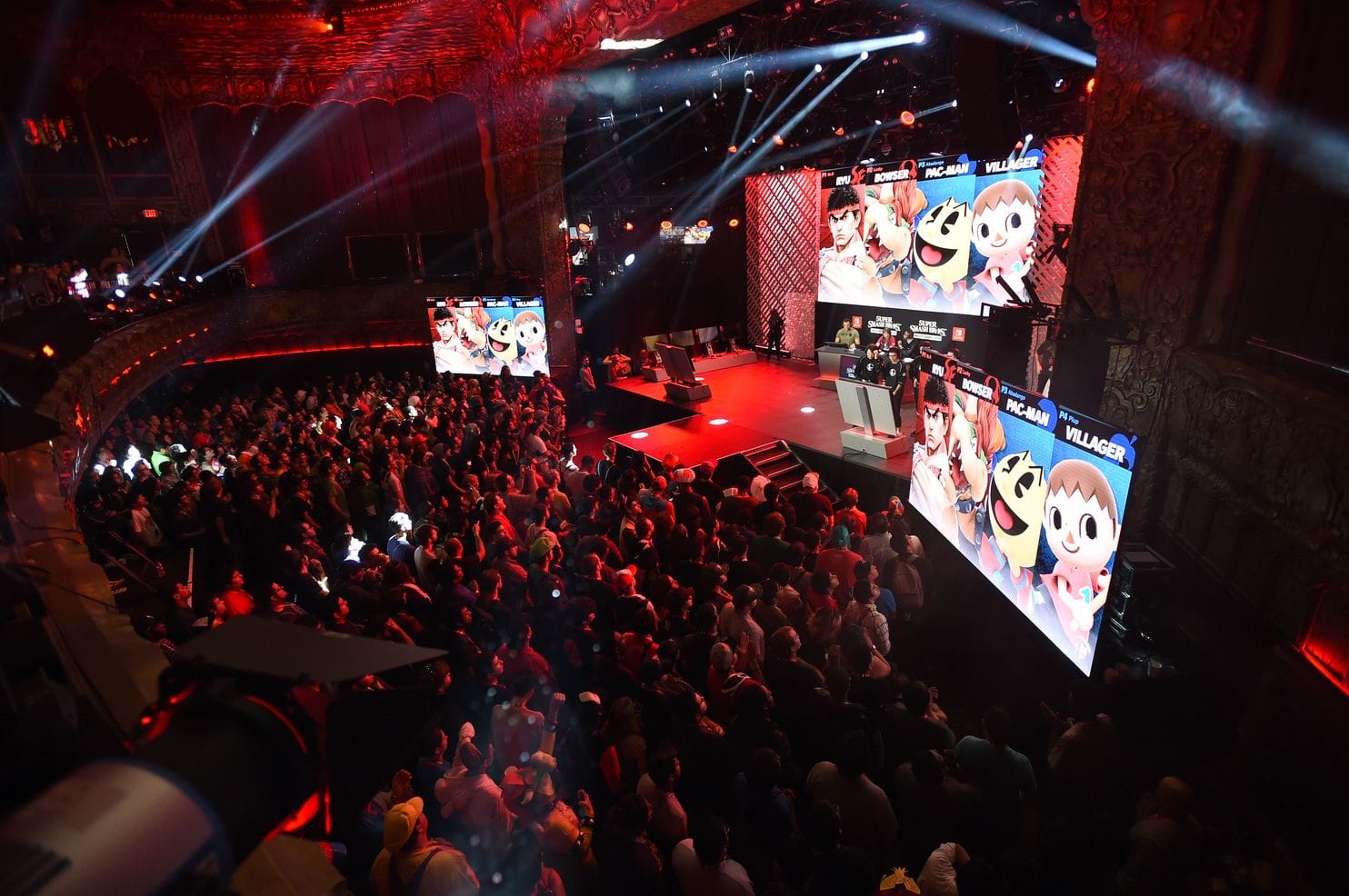 LOS ANGELES — On the opening day of the video game industry’s largest annual convention, fans queued up for hours then stood shoulder to shoulder inside Nintendo’s massive exhibition area, eager to sample one of the most anticipated game releases in 2018, Super Smash Bros. Ultimate. A little over a half-mile away in The Belasco Theater, some of the top professional Smash Bros. players in the world competed in a rare invite-only tournament put on by the company. Combined, the events became the main talking point of the Electronic Entertainment Expo, better known as E3, an exhibition that welcomed over 69,000 video gamers to the Los Angeles Convention Center across its three-day run.

The hands-on demos and tournament represent a huge promotional push by Nintendo for the latest installment of its beloved Smash Bros. series, a fighting game that pits some of Nintendo’s most memorable characters like Mario, Link and Donkey Kong against one another in a battle to swat opponents off the screen. It also demonstrates one of the company’s most intriguing issues: How will Nintendo reconcile the possibilities presented by the rise of esports with the company’s long-standing apprehension toward competitive gaming?

In nearly every other competitive gaming circuit, whether it be sporting titles like EA’s FIFA or Activision’s Call of Duty, the competitions utilize the latest versions of the franchise. And yet, the Smash community is divided.

The main competitive history of the game revolves around Super Smash Bros. Melee, a more technical and aggressive version that was first released in 2002 on the Nintendo Game Cube. That title has attracted most of the game’s better known professional gamers due to its more intricate movements, which reward most skilled players. Super Smash Bros. for Wii U (referred to as Smash 4 by most fans) is a slower and more defensive version of the game that has been adopted by a younger crowd of gamers.

As a result, Nintendo has missed out on maximizing its opportunity to promote its new title via the competitive circuit — as other gaming titles such as Street Fighter and Call of Duty have done. The practice is much the same as sporting goods companies showcasing their latest innovations through sponsorship deals with athletes in the more established pro sports leagues. The Melee dynamic would be similar to Nike introducing a new, high-performance basketball sneaker only to see its top athletes sport vintage Air Jordan’s instead. To this point in time, however, Nintendo has been relatively indifferent. While some companies have piled into an esports market projected by analytics company Newzoo to reach a valuation of $1.5 billion by 2020, Nintendo has been reluctant to fully embrace competitive gaming. Even though Smash Bros. is one of the core titles of the esports world.

The release of Ultimate, due out in early December, represents Nintendo’s latest opportunity to unite the competitive circuit with its casual audience, a challenge that fell to renowned game designer Masahiro Sakurai, who has directed every installment of the Smash Bros. line. Should he cater to the competitive circuit by upping the tempo and complexity of the game, or favor the more robust casual audience by making the game more accessible?

“When you talk about audience, I don’t really think too much about the audience per se,” Sakurai told The Washington Post through a translator ahead of the game’s unveiling at E3. “I feel like a game, at the end of the day, is about playing the game. But if we focus too much on the top level players — or the audience — then the game skews a little bit too much on the technical side.”

The revered status of Smash Bros. among its fans stems from the fact that it is easy to learn, but difficult to master. And Sakurai has always been adjusting the scales between ease and difficulty. As a result, some games have been more technical than others, causing a split within the competitive community. But both camps flaunt strong followings.

Nintendo of America has slowly warmed to the competitive Smash community in the past few years, partnering with tournaments to help with various costs and staging the invitational at E3. Even then, Nintendo has not gone as far as Capcom has with Street Fighter in embracing esports. There’s no tournament circuit sanctioned by Nintendo and the company does not contribute to tournament prize pots.

Smash competitors in Japan face more barriers, as Japanese gambling laws prevent prize money from being doled out in competition. To navigate these laws, Japanese games industry organizations have banded together to create official esports player licenses. Players holding these licenses are permitted to compete for serious cash prizes. However, Nintendo is blocking Smash and its other properties from being a part of this licensing program.

Nintendo did not provide any comment to The Post when asked for its official stance toward esports. Though Sakurai is not a Nintendo employee and his thoughts do not represent the company, as someone who has overseen every installment of the Smash Bros. franchise, he had his own views on why the company has not warmed to competitive gaming.

“I think the philosophy behind them doesn’t go in line with Nintendo’s philosophy in that some of these players are playing for the prize money,” Sakurai said. “It comes to a point where they’re playing the game for the money, and I feel that kind of direction doesn’t coincide with Nintendo’s view of what games should be.”

Sakurai is also a Street Fighter fan, a game produced by a company in Capcom that has fully embraced esports. The publisher has a worldwide tournament circuit columinating with the Capcom Cup, where the winner takes over two-hundred thousand dollars in prize money. Sony PlayStation is the title sponsor for the Pro Tour, but Red Bull, as well as sponsors at tournaments around the world have all jumped in. Sakurai does not see such close ties to esports as problematic, yet he does believe his approach with Smash opens the game up to a wider audience compared to the more intricate gameplay of Street Fighter.

“It’s not to say that Street Fighter is failing [by more fully embracing competitive gaming] by any means, but personally, I think any games with command inputs are difficult. The creator-side is trying to raise people who do that,” Sakurai said. “It doesn’t beat a game where you press one button to create a special move. I think that’s really easy to pick up for a lot of people.”

That philosophy has been rewarded on the sales front. Even with Capcom’s committed efforts in the esports scene upping its visibility on streaming platforms and in the media, Street Fighter V has only managed to sell 1.9 million copies since its Feb. 2016 release. That pales in comparison to Smash 4, in which the Wii U version sold 5.07 million since Sept. 2014, with the 3DS version adding another 8.15 million. It’s also probably why it was easy for Nintendo to fill the Belasco Theater during E3. At the company’s main exhibition area in the L.A. Convention Center, the line for casual gamers to sample the new version stretched far from the main floor and into an overflow section behind the Nintendo showcase for the duration of the expo. Twitter reported that Smash Bros. was the most-tweeted-about topic during E3, which generated nearly 15 million tweets that included the E3 hashtag. The buzz peaked during the Nintendo news conference with roughly 890,000 tweets during an hour-long span on June 12.

That robust audience is why, while Sakurai has increased the game’s tempo in Ultimate, he refrained from reinserting some of the more popular advanced mechanics that resonated so well with Melee’s professional crowd. This includes wavedashing, a technique that makes it look like a player’s character is sliding, allowing characters to rapidly change their position, including sliding backward, while still facing their opponent. “I think a lot of Melee players love Melee. But at the same time, I think a lot of players, on the other hand, gave up on Melee because it’s too technical, because they can’t keep up with it,” Sakurai said. “And I know there were players who got tendinitis from playing, and messing with the controller so much … that really is hard on the player and I feel like a game should really focus on what the target audience is.”

Still, Nintendo is hoping its competitive scene will solidify around the new title, helping turn the Smash circuit into a top-10 esports property.

The invitational tournament during E3 was one of Nintendo’s most open embraces of the competitive scene. And unsurprisingly, everyone — from media to Nintendo employees — was asking top players what they thought of the new game.

“It’s definitely a step up from Smash 4 in movement,” Cloud9’s Joseph “Mang0” Marquez said. Marquez — a two-time champion of the fighting-game circuit’s most prestigious tournament, Evolution — is considered one of the best Melee players in the world. “So I think they’re headed in the right direction, which is awesome.”

But there remained a desire by most players to reincorporate some of the more advanced movements that make Melee special.

“I really don’t think a few extra techniques hurts the bottom line of casual [players] playing with items and such,” said Team SoloMid’s William “Leffen” Hjelte. “The thing I always say — Melee is kind of what really kick-started Smash into this multimillion dollar franchise, and people play it casually. Almost all Melee players that are pro today started as casual fans.”