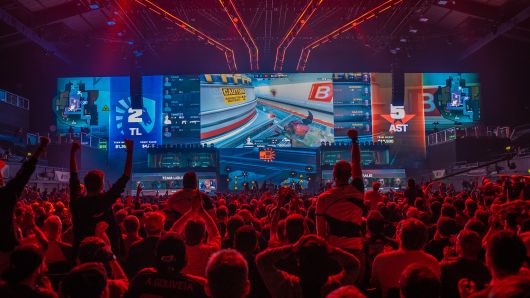 Twenty-eight year old Ho Kun Xian started gaming as a young boy. He came from a poor family who managed to spare him $2 to spend on video arcades whenever he went. There he began to master the art of fighting games. Years later, he turned pro, earnings hundreds of thousands of dollars in prize money as a gamer.

Xian’s story highlights the burgeoning esports industry, which is minting millionaires who play video games for a living by the age of 30.

Esports refers to competitive video gaming where teams or individuals play against each other in games such as EA’s “FIFA” series or Valve Corporation’s “Dota 2” for hundreds of thousands of dollars in prize money, in front of millions of viewers watching online and in physical arenas. Market research firm Newzoo forecasts the esports economy will grow to $905.6 million this year and $1.4 billion by 2020.

CNBC’s latest episode of “Beyond the Valley,” which was published Wednesday, takes a look inside the industry.

While esports may be smaller than traditional sports leagues like soccer’s Premier League in the U.K. or the NBA, it’s growing rapidly with new jobs and careers being made.

“I think I never thought, ‘I better do this,’ because even when I was 18 years old, there was no such thing as a pro gaming career, so this career didn’t exist,” Xian told CNBC.

Millions in viewership and prize money

It’s only in the past few years that professional gaming has become a viable career option. Prize money for winning tournaments is on the rise and major brands want sponsor teams or competitions to reach a millennial audience.

To give a sense of the scale of the industry, here’s some stats. The International 2018, the biggest tournament for the game “Dota 2,” was held in August and had a total prize pool of $25.5 million. The final had nearly 15 million people watching across various streaming sites, including Amazon-owned Twitch. If you took out the number of Chinese viewers that number would have fallen to 1.2 million, showing the scale of the market in the world’s second-largest economy.

In fact, esports is a truly international phenomenon. Newzoo expects 53 percent of the esports audience to be in the Asia Pacific region in 2018 and 18 percent to be in Europe. In comparison, North America will account for around 14 percent.

Asia has a rich gaming history, being home to many well-known gaming companies such as Sony and Nintendo. The growth in viewership has been driven by the higher quality broadcast being put on. If you were to watch an esports tournament online you’d see many of the aspects that appear on traditional sports broadcasts — commentary, analysis and stats.

“What we are seeing now over time, is we are seeing a professional element develop, we are seeing a strong critical mass of amateur competition develop, and we are continuing to see the gamers,” Garry Cook, executive chairman at U.K.-based Gfinity, told CNBC’s “Beyond the Valley.”

“So, therefore, the event is only the same as traditional sports — the very best, performing in an environment that allows us to watch. The Romans were doing that.”

Gfinity is a U.K.-based company that has an arena in London where it helps put on tournaments and create content.

Not only is esports broadcasts trying to mirror traditional sports leagues, some of the training aspects have similarities too.

Conran Tobin, or “Rannerz” as he is known in the esports world, is a professional “FIFA 19” player. “FIFA 19” is a soccer game. Tobin lives in a house in London with other players and a coach. He runs drills on FIFA, practices aspects of the game such as corners and free kicks, and even goes to the gym, saying it helps with having a healthy body and healthy mind.

Tobin trains for 16 hours a day and plans tactics around his strength, which is corner kicks, he told CNBC’s “Beyond the Valley.”

The playing age of esports players also mirrors other sports. Tobin is 21 and it’s quite common for players to retire in their late 20s or early 30s.

“The main reason, and it’s the same reason for pretty much all esports, it’s the reactions and just thinking ability does slowly degrade, where you’re just not going to be as fast on your feet as a 21-year-old,” Tobin said.

He added that many players at the top of their game could be comfortable for life with the money they’ve earned in their short career. Others may go into other areas of the industry, such as coaching.

While industry analysts are expecting esports to be worth more than a $1 billion in a couple of years, Gfinity’s Cook thinks those estimates are conservative.

“We are in a space that everybody wants to have access to, when you create that inertia, corporate brands, we are seeing that over 70 percent of the revenue right now in this economy is created by advertising, rights fees and marketing. So that’s a huge number. That means everybody wants access to the consumers,” Cook said.

But esports is still small when compared to some of the world’s major sports leagues. It will likely continue to get more mainstream, but is unlikely to challenge traditional leagues in terms of scale and money, according to Tobin.

“I think it’ll get to that stage where it’s just common knowledge,” he said. “But I don’t think it can compete with proper traditional sports.”