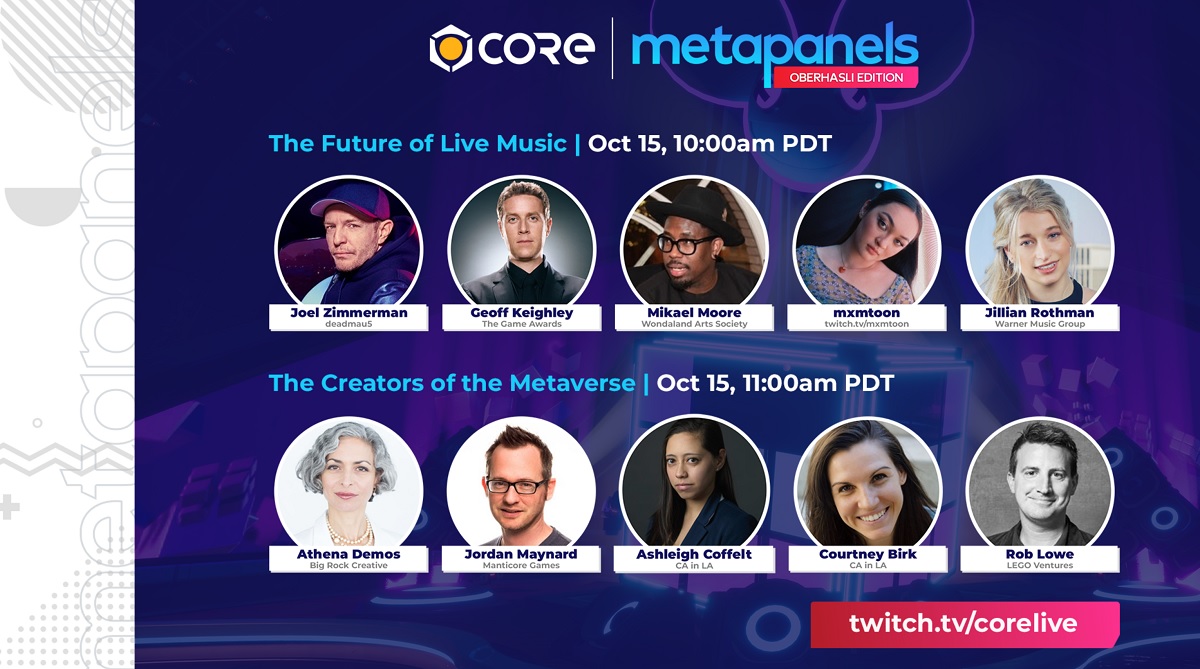 How’s this for meta? Manticore is hosting a couple of metapanels on the metaverse inside the gaming world of Core.

San Mateo, California-based Manticore is the host to more than 50,000 games and online experiences in Core, which provides a platform and tools for players to create their own games. Based on Epic’s Unreal game engine, the games feature a more realistic world and versions of animated characters compared to the more popular Roblox. The metaverse is the anticipated universe of virtual worlds that are all interconnected, like in novels such as Snow Crash and Ready Player One.

On October 15, Manticore will host hybrid panels where leaders from the gaming, music, and entertainment industries share their vision for the metaverse. They’ll be centered around the future of live music, virtual music events, and how major brands are telling stories through the metaverse, said Frederic Descamps, CEO of Manticore Games, in an interview with GamesBeat. Panelists will be streaming from within a dynamic Core environment, which anyone can watch live at twitch.tv/corelive.

The first panel will take place at 9:30 a.m. Pacific time. and focus on the future of live music. Bands, brands, and fans are rewriting the rules of live music, and concerts are just the beginning. Panelists will include artists, event builders, and tech leaders who are rethinking the meaning of “live” with digital, VR, and XR experiences.

Geoff Keighley, creator of The Game Awards, will moderate the music panel. Joel Zimmerman, known as Deadmau5 (pronounced “dead mouse”), will join the panel as he launched his most recent song in Core. They will be joined by Mxmtoon, a singer-songwriter and actor who recently acted in the adventure game Life is Strange: True Colors; Jillian Rothman, a member of Warner Music Group’s New Business & Ventures team; and Mikael Moore, talent manager and managing partner at Wondaland Arts Society. 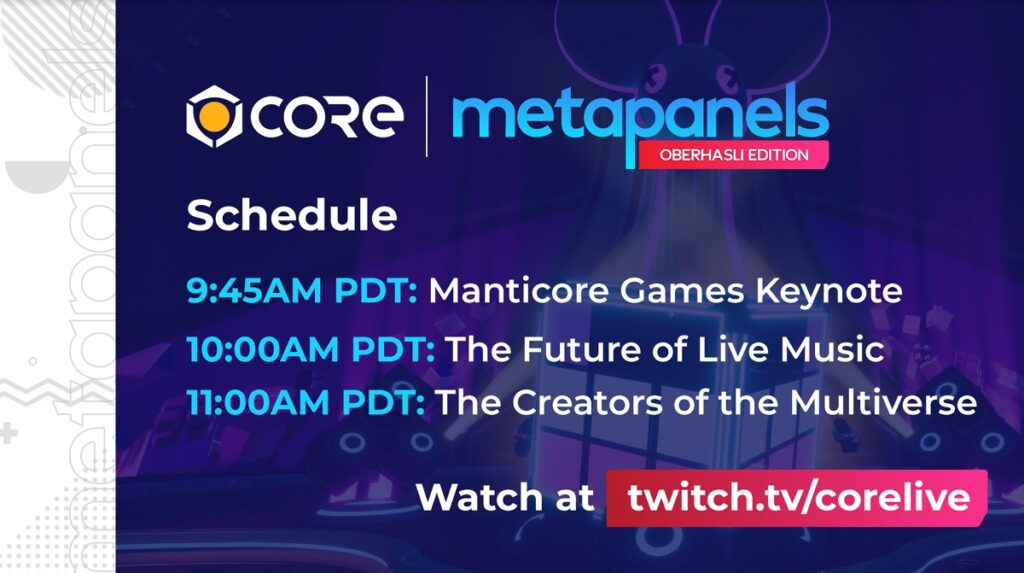 The second panel will focus on the games and is about the creators of the metaverse. Fans are creating the games, content, and experiences of the metaverse, and they’re using big intellectual properties to do it. This panel will include leaders from media, entertainment, and creative brands who will discuss how they’re harnessing “user-generated events” to build their IP. The event will end at 12 p.m. Pacific.

The panel includes Rob Lowe, managing director of Lego Ventures’ Digital Play investment group;  Jordan Maynard, chief creative officer at Manticore Games; Athena Demos is founder and co-producer of Big Rock Creative (BRCvr), a global creative community that hosted the official virtual reality experience for Burning Man; and CA in LA, which consists of Courtney Birk and Ashleigh Coffelt. They have created over 100 films and played thousands of songs together.

The company is working on creating the right environment for the panels now. Descamps wants it to be a relaxing environment.

“The point is that there are actually events you can organize in Core and we’ll have a slew of more features coming in the next weeks and months,” he said.

Descamps said his interest in the metaverse goes back even farther than Neal Stephenson’s Snow Crash novel from 1992 — the first book that referenced the “metaverse.” Descamps also liked the multiverse of fantasy novelist Michael Moorcock (as did I), who wrote about the “multiverse” of The Eternal Champion with heroes and anti-heroes like Elric, Hawkmoon, and Corum. 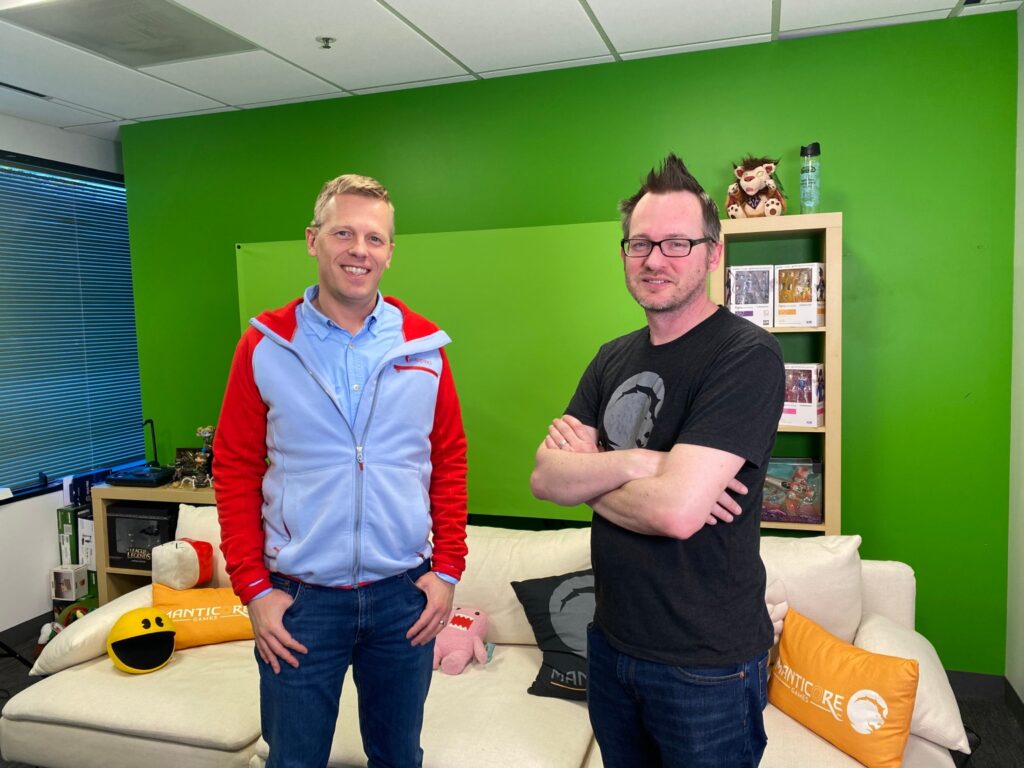 Descamps used to organize gaming events in San Francisco years before starting Manticore Games, and now the company is creating the tools to host events inside Core. In that way, the panels will show off the capability.

Core has also had users organize programming classes in multiple languages. There’s a lot of variety in Core, as is befitting a contender for the metaverse.

“I see the games and I get emotional,” he said. “And we have creators who are making nice amounts of money.”