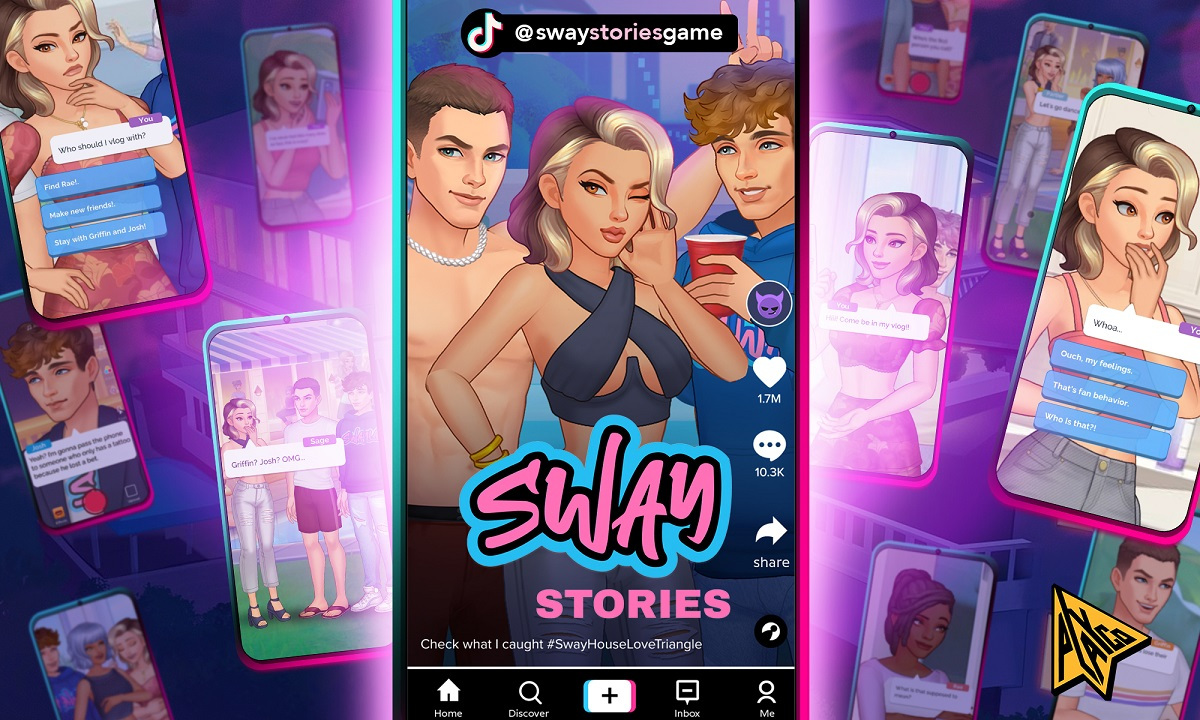 Playco, a maker of instantly playable games for social platforms, announced Sway Stories for TikTok. The game is a first for the tremendously popular social network for short videos, and it represents a big opportunity for Playco to be an early mover in a fledgling market for games.

Playco is working with TikTok stars on the project, such as Griffin Johnson of Sway House fame and Josh Richards of BFFs. This will be the first time people on TikTok can play a game without leaving the popular social media app. Users play the part of a young, aspiring creator who receives a surprise invitation to a party at the Sway House, and their choices determine how the young creator’s story will play out.

This kind of opportunity is why Tokyo-based Playco was able to raise $100 million at a $1 billion valuation for instant games last year. The company is focusing on making a web browser gaming engine for instant games that are playable on a web link and can run on any platform.

The funding comes as the industry is discussing a “post-app store” world, and instant games may be an ideal vessel for delivering games with the potential to reach billions of players.

Playco is targeting platforms such as cloud streaming, Google Play Instant, iOS App Clips, Facebook Instant Games, and Snapchat Minis. Playco will make games, provide the backend infrastructure and analytics, and distribute them across a number of instant game platforms.

“We partnered closely with TikTok to make Sway Stories a perfect fit for their platform,” said Playco cofounder Justin Waldron in an email to GamesBeat. “Working with both creators and the platforms like TikTok enables us to build a completely new type of game for fans. We are excited to continue working with both creators and social platforms to reimagine the creator economy.”

Playco sprang from Carter’s previous startup, Game Closure. It went through Stanford University’s StartX student-led accelerator and was creating cross-platform instant games that did not require downloads. The company raised $12 million in 2012, but it was early, coming out at a time when some browsers did not support HTML5 or could not run it quickly.

Game Closure continued until 2020, but Carter and Waldron eventually decided to create a new company. They acquired some tech from Game Closure and brought on some of its employees, as well as hiring new people from the game industry.

Playco sees a big hole in the gaming market. Even though technology has created more ways for us to connect and play games together, the opposite is actually happening. The gaming market has grown more niche and app-based.

Playco wants to make instant games that can appeal to billions of people, in broadly attractive genres with gameplay that is simple to pick up and play. All players need to do is share a link for the game to access it from anywhere. Playco sees real opportunity in its games being able to live and thrive on the communications platforms people use every day — from Facebook and Instagram Messenger to WeChat, Snap, Tik Tok, Tinder, Zoom, and House Party.

Epic Games is in a legal battle with both Google and Apple over antitrust allegations around their app store rules related to Epic’s Fortnite. Epic believes the tech giants put too many restrictions Apple on game sales in the App Store, and Epic won a small concession in a legal ruling last week. But instant games, distributed via a weblink, can bypass app stores.

“Bringing the first game to TikTok is an exciting step, and we’re thrilled to be unlocking new opportunities in the creator economy,” Waldron said. “Playco’s new game platform makes it simple for creators to participate directly in game IP and new forms of monetization, like [nonfungible tokens] NFTs, inside the channels they’ve spent years developing.”

Playco has 150 people, and it began collaborating with Sway House earlier this year. Playco has developed a storytelling platform that empowers creators to publish their own games directly into their social channels, deepening their relationship with fans and opening new opportunities for interaction and monetization across multiple platforms and billions of potential fans.

The games help creators like Richards and Johnson excite their fans while providing platforms with new user experiences. With creators under pressure to continually release new content, Playco’s platform helps them deliver engaging content at scale.

Richards and Johnson were original members of the Sway House, which became popular when it launched on TikTok in 2019. Meanwhile, Richards has invested in a multitude of projects such as CrossCheck Studios, CrossCheck Sports, Animal Capital, HawkeZ, and Ani Energy among others, in an attempt to focus on building equity for the long-haul.